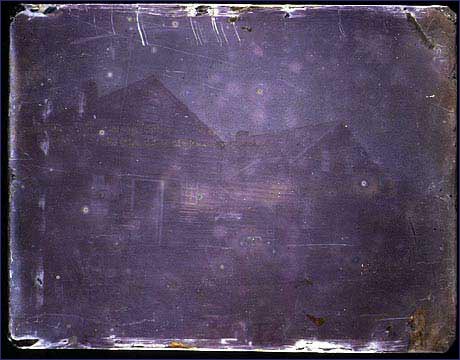 October 22, 1842 in the United States Patent Office, Daniel Davis, Jr, of Boston, Massachusetts, applied for a patent for an Improvement In Coloring Daguerreotype-Pictures, specification forming part of letters patent no. 2,826, dated october 22, 1842:

To all whom it may concern Be it known that I, DANIEL DAVIS, Jr., of Boston, in the county of Suffolk and State of Massachusetts, have discovered a new and useful Improvement in Daguerreotype…

Those of us who remember the frustration of having to wait for the arrival of colour television in Australia (in 1975, when in the United Kingdom they’d had it since 1969!) would be in sympathy with those in the mid-1800s who had been so delighted with the invention of the daguerreotype and who were then eagerly anticipating the discovery of natural colour photography, which must surely have been only weeks away.

Before such an invention came along, the use of pigments to hand-colour photographs would have to do. Starting only a couple of years after the advent of the daguerreotype they began to be coloured in one of two ways: hand tinting or hand colouring which rendered a lightly painted image still distinguishable as a photograph; or over-painting which partially or completely obscured the original image, the latter usually done in order for an artist to pawn off on an unsophisticated public the painted image as a freehand work of art; often involving the altering of undesired aspects of the original photograph at the wim of the vanities of the client.

Davis’ invention was to colour the actual emulsion of the daguerreotype though electrolysis. His claim goes on to explain how a plate is immersed in different baths of solution, each of which will produce a different colour when…

The negative wire of a magneto-electric machine or galvanic battery of sufficient intensity [is] applied to…the plate or tablet while the positive wire is immersed in the solution.

If I …wish to produce a deeper shade of color upon the face than upon the body or dress, the extremity of the positive pole or wire of the battery should be held longer [on] the face than with the body of the image. A discoloration of the face will thus take place.

…Thus one uniform color or shade may be obtained over the whole surface of the picture, or different parts thereof may be colored, as above set forth.

The positive pole or wire of the battery thus becomes the pencil by which the image may be tinted, [whereby] the deposit formed upon the plate…[combines] with the chemical or photographic surface of the picture, [to] produce a transparent color.

Having a hand-colored photographic portrait became a status symbol, though most working-class people could only afford a rosy tint on the cheeks and gold paint on jewellery.

Colouring was seen as something that should enhance the photograph and not obscure it (except in the case of overpainting), so it was recommended to apply a few light layers of colour until the right shade was achieved rather than one dark coating. A binder such as gum arabic was needed to adhere to the photographic substrate. The colors most often used for coloring photographs were India red and pink madder for coloring cheeks, and gold paint for coloring jewellery.

The daguerreotype surface was too delicate to accept the colours until Hippolyte Fizeau in August 1840 introduced his gold toning process which strengthened the image and hardened the surface, after which most colourists applied the complicated method of hand-coloring daguerreotypes invented by a Swiss photographer named J.B. Isenring; the image was traced onto a transparency and from this they created stencils , one for each colour that was to be applied.

Dry color was then mixed with a little gum arabic and sprinkled over the stencils. Breathing on the colors activated the gum arabic and fixed the colors in place. Silver jewellery was accentuated on daguerreotypes by scratching the image to reveal the silver plate below.

Davis’ method permitted overall tinting of a photograph with chemical bath hooked up to a galvanic battery to create a current until the desired tone was reached. However as a local colourant, for which he describes using the battery wire as a pencil, the method he patented was unsuccessful.

The limitation of Davis’ method was overcome a year later by Warren Thompson who applyed a gum tragacanth resist to those areas which it was desired to protect from the particular colour to be deposited. Between one electrolysis bath and the next, he removed the gum resist with hot water and applied it to the areas already coloured.

Then in 1850, Levi L. Hill (1816-1865), an obscure daguerreian photographer in a remote part of New York State published a booklet in which he claimed that:

Several years of experiments have led us to the discovery of some remarkable facts, in reference to the process of daguerreotyping in the colours of nature. For instance, we can produce blue, red, violet and orange on one plate and at one and the same time. We can, also, produce a landscape with these colours beautifully developed – and this we can do in only one third more time than is required for a daguerreotype. The great problem is fairly solved.

His announcement caused the sales of conventional daguerreotypes, whether plain or hand coloured, to slump as consumers awaited the release of this new colour photography, and Hill was threatened with physical violence from other daguerreotypists. Valuable support came from none other than Samuel Morse who had seen some of Hill’s work in his laboratory. Hill came under the suspicion of charlatanism, and when he published his process in  A Treatise on Heliography; or the Production of Pictures, by Means of Light, in Natural Colours became available it was criticised unfairly for being vague and obscure. The method was complex, and involved dangerous, explosive or corrosive chemistry. It is likely that it was exposure to these that caused Hill’s early demise in 1865.

The publication coincided with the decline of the daguerreotype process, so unsurprisingly heliography (or Hillotype ) was soon forgotten. Surviving examples (below) of his plates show several muted colours on the one plate but testing has revealed that some of the colour has been applied and is not inherent in the emulsion 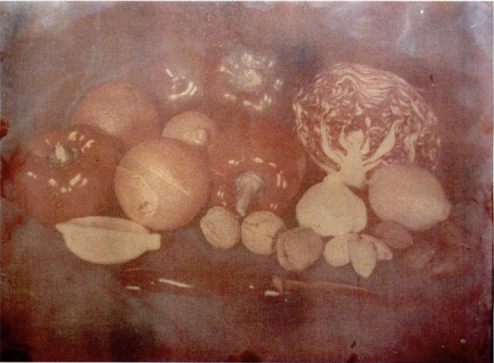 This Natural Museum of American History handout image received 29 October 2007 shows a Hillotype of a print depicting a girl and sheep- where natural colors are apparent on this plate- no chemical elements uniform were detected.The Smithsonian’s National Museum of American History (NMAH), the Getty Conservation Institute (GCI), and the Getty Foundation have teamed up to examine a 156 year-old mystery that remains, to this day, one of the most controversial questions in photography – and their research has revealed some rather surprising results. One of the earliest forms of photography, the daguerreotype, is named after French artist and chemist Louis-Jacques-Mande Daguerre, who invented the process in 1839. Daguerreotype photography spread rapidly across the United States and just 11 years later, the Rev. Levi Hill of Westkill, NY, claimed for the first time to have invented a way to produce naturally colored daguerreotypes, or Hillotypes, as they became known. When Hill refused to release the details of his process until a patent was filed, the profession denounced him as a fraud. In 156 years, no definitive evidence has been presented to suggest that Hill was or was not an imposter, until now. Using state-of-the-art technology, the 62 Hillotypes acquired by the Smithsonian in 1933 from Hill’s son-in-law, John Boggs Garrison, finally gave up their secrets. Examination of a number of the Hillotypes by GCI scientists and curators from the Smithsonian���s photography collection have confirmed that Hill was indeed a genius – he did discover a method to create several natural colors in his photographs. AFP PHOTO/NATIONAL MUSEUM OF AMERICAN HISTORY/SMITHSONIAN MUSEUM/HO/ RESTRICTED TO EDITORIAL USE /NO SALES =GETTY OUT= (Photo credit should read HO/AFP/Getty Images)

Hill’s heliography was never likely to displace hand colouring even if it had been available in the hey-day of the daguerrian era, and its validity remained under question, until  modern researcher, Professor Joseph Boudreau replicated the long and costly process with some results in which he contacted printed a colour transparency onto the plate.

He still questioned ‘how the colour is formed on the plates ‘. How each of the applied colouring substances could find its way to the appropriate area of the plate is a mystery. After all, a daguerreotype plate, even when sensitised with chlorine as in Hill’s process, would be insensitive to green, yellow, orange and red and thus these colours would be represented only by the amount of reflected blue and UV, and thus bear no direct relationship to the original colour.

Looking carefully at a daguerreotype in diffused daylight at a critical angle, faint colours are in fact discernable. This example is from the Daguerreotype Journal‘s Special Issue for The Daguerreotype Symposium 2015. The scanner used has heightened this colouration. Alan Elliott ARPS surmises that the thickness of the surface layer of the daguerreotype varies with the intensity and the wavelength of the actinic rays to create colour from interference of the film over the reflective surface of the plate, like oil on a puddle.

As in this example, Elliot reports that “overexposed highlights can show as a bluish colouration on a daguerreotype plate,… enhanced in this case by the scanning process. Overexposure in the UV-rich sky may cause a faint blue tinge to appear there and because the gold toning process seems to deposit gold mainly in the mid-tones and shadows”. There would be gold in the image of the cliff but not in the sky.

It is only by coincidence that the colours happened to be somewhat close to those of the original scene. We see colour where we expect to see it.

One thought on “October 22: Colourreotype?”