October 17: Have you seen the photographers dancing in the streets? Enjoying the public holiday? You should, as today marks the announcement of the invention that made digital photography possible!

On this day forty-seven years ago, two engineers, at Bell Laboratories in New Jersey announced that they had invented a novel electronic device based on silicon that was to become an important scientific tool..and the heart of the cameras we now use. Willard Boyle and George Smith had created the charge coupled device, or CCD for which

they would win the 2009 Nobel Prize in Physics. They were working in the AT&T Bell Labs competing with others there who were working on different methods of memory technology. In 1969, they were approached by their VP, Jack Morton, who gave them an ultimatum: make something to compete with the current technology, or funds are going to be allocated elsewhere.

Under considerable pressure, Smith and Boyle brainstormed and, in one hour, emerged with the basic plans for the CCD, the sensor still used in digital photography today.

Their aim was to make memory storage, but they knew the device could be activated with light, taking advantage of the photoelectric effect, which won Albert Einstein the physics Nobel in 1921. In short, when light strikes a small piece of silicon, it knocks electrons out of their orbits. If the silicon has been formed into small photocells, or pixels, each cell acts as a well that captures and holds the electrons for an extended period.

Boyle and Smith’s key breakthrough was devising a way to read out the number and location of electrons captured in each well in an array of pixels. First they worked with a strip of such cells but soon moved on to applying the principle to the matrix required to replace film. In a 10-by-10 array, for example, the data are converted into a chain of electron concentrations 100 pixels long. This can be converted back into visual information.

When light strikes a CCD, a tiny grid of photosensitive silicon cells, or pixels (picture element), which builds a charge proportional to the intensity of the light hitting it. This charge can be measured precisely and we can know exactly how bright that portion should be. Add filters, and colour can be discerned too.The number of electrons depends on the amount of light arriving, so recording an image on a CCD is like forming an image on photographic film. The difference is that you can use a piece of film only once. The CCD can be used repeatedly. This is because you can move the pattern of charge corresponding to one image out of the array of pixels, and record it more permanently while the next image forms. If you vary the voltages in the correct, regular way, the electrons move along, one pixel at a time, until they leave the array at a single point. The original two-dimensional array of captured electrons becomes transformed into a long chain of ‘buckets’ of electrons which are carried out of the matrix in the manner of a bucket-brigade of firemen carrying water to a fire without themselves moving.

The buckets from the row nearest the outlet lead the way, followed by those from the next row, and so on, until the whole array is cleared. As the buckets leave the array, the charge in each of the buckets generates a small voltage at the output of a transistor. This process converts the image into a chain of voltage pulses. Each voltage pulse is proportional in size to the amount of light that arrived at each pixel on the CCD.

Boyle’s and Smith’s patent wasn’t filed until Dec 16, 1970, but the diagram in the application is essentially the same as the sketch from their one-hour brainstorming:

The immediate use for CCDs was in astronomy. Even in the case of the pictures taken by Soviet, then US, space probes, film had been used, processed and scanned on the craft and the data radioed to Earth (see the earlier post ‘Luna’). In early images the matrix of pixels is very clear, as in this 1974 view of the moon’s surface which was the first astronomical image taken with a CCD. It was only 100 pixels square (0.01 megapixels). The detector also responds to invisible light and X-rays and can record even the faintest image.

The resolution is minuscule compared to current consumer cameras but it is enough to remove the grid-like appearance seen in the 1974 image. 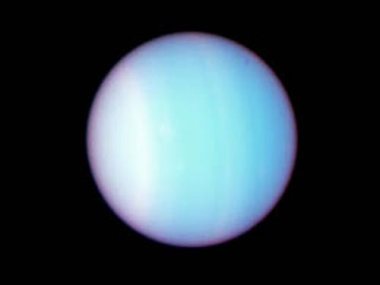 Above is the first ever CCD image of Uranus, taken with a portable 400 x 400 CCD sensor in 1976, compared with a 2003 Hubble true-colour image of Uranus taken with the advanced camera for surveys, with twin CCDs capable of 16 megapixels, which shows the planet in more detail.

The first true digital camera was cobbled together in 1975 using leftover parts found in the the Applied Research Lab at Kodak, by Steven Sasson, a young engineer. About the size of a breadbox, it took 23 seconds to take a single black and white image, which was then stored on a cassette tape.

Fairchild Semiconductor of San Jose produced the first digital camera with a small (by modern standards) 100-pixel-by-100-pixel photo sensor (10,000 pixels total). The camera went into production a few years later. By 1975, Boyle and Smith had also produced a working video camera suitable for television. From that point, digital imaging has challenged, then surpassed 35mm film, and now even threatens larger formats for superior resolution, sensitivity and dynamic range.

Should we rejoice, however? The relative detriment to the environment of film-based photography, with its chemical waste, and digital is hard to determine with any certainty. While it costs ‘nothing’ in materials, digital cameras have become disposable, requiring regular updates, and generating vast quantities of electronic landfill.