October 13 is the day in 1917 on which this photograph of a vision was taken near the then small town of Fátima, Portugal.

It shows 70,000 people looking at the sun at the behest of three shepherd children; Lúcia Santos, and her cousins Jacinta and Francisco Marto, to whom the Virgin Mary apparently revealed “three secrets” in visions projected into an oak tree amongst the parched limestone outcrops, at Cova da Iria (“Irene’s Cove”) which was a field belonging to the family of Lúcia Santos where the children pastured their sheep, really in the middle of nowhere. 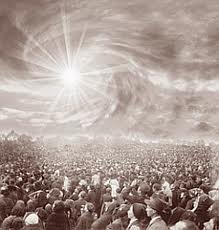 ‘The Miracle of the Sun’ appeared to this multitude after hours standing in ‘torrential rain’:

“The rain ceased and the sun rotated three times, launching variously colored rays of light all around. It seemed as if the sun was coming down from the sky toward the crowd. Thousands of witnesses, including people from many miles away, saw the sun leave its place in the sky and begin to spin like a top. Everyone was amazed.”, goes the story. Someone has done a Photoshop rendering of the vision, in case you can’t imagine it (above). Hours of staring into the sun is likely to do things to your eyes, producing dancing, whirling spots, and maybe burn out your retinas too! Don’t try this at home.

The images have a biblical quality which is quite a vision in itself…hordes of supplicants kneeling amongst the stony rises, praying for the miracle that might bring back the soldiers from the war (Portugal was a reluctant ally of Britain), heal their sick and bring happines and prosperity. You can just make out, in the lower image of the centre spread, the small wooden arch like a football goal surmounted by a cross that marks the site of the children’s visions, and the oak tree behind.

The arch was soon turned into a little stone chapel, which with considerable devotional donations has in turn been housed inside an immense basilica (below), which brought local development to the region, eventually enabling the town of Fátima to be elevated to the status of city on 12 July 1997.

The news pictures were taken by Joshua Benoliel (13 January 1873 – 3 February 1932) who was a Lisbon-born photojournalist and the official photographer for King Carlos I of Portugal. He worked for many years for O Século, documenting the main events in Portuguese history during the early decades of the 20th century; including the downfall of monarchy and Portuguese participation in World War I, as well as the everyday, from society parties to common street scenes. He was correspondent for Spanish newspaper ABC and French magazine L’Illustration.

Benoliel’s last picture in the newspaper pages above, a panorama of the crowd seen from behind, the sky softly flaring over them, seems to promise an actual photographic record of the religious vision. However, the sky is empty.

Perhaps a Catholic apparition might not impress itself on the film of a Jewish photographer?!