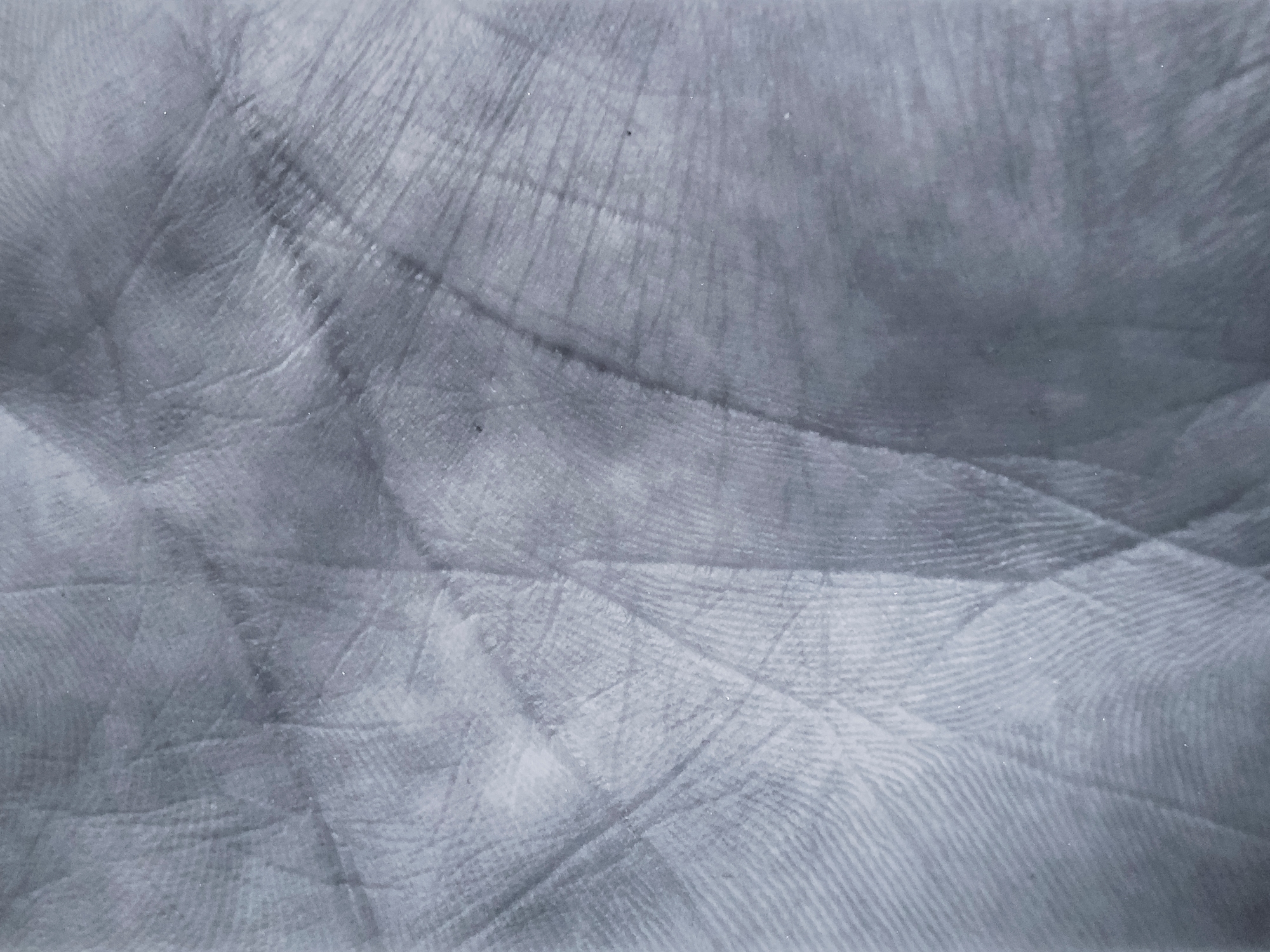 We recorded images on photographic emulsion. Emulsion is a skin. Can we feel through it?

Orbit is a gallery space set aside at the Castlemaine Art Museum for a series of exhibitions by artists who live and work in Central Victoria. The program is supported by the Victorian Government through Creative Victoria and by Art Guide Australia, tintdesign and the Castlemaine Mail. Currently showing 8 July—15 August 2021 is Tashara Roberts‘ Your skin my skin.

The small gallery imposes an intimacy on the visitor not experienced in the succession of CAM’s three grand Deco ‘salons’ and, being situated in the space between the back and middle of those, the visitor experiences a flow of traffic across communicating entrances at one end. One is caught in an eddy, like the leaf that gracefully orbits one or two others, dancing a shy pavane, between rocks at the shoreline, before being pulled again into the main stream.

I ambled in, not knowing what to expect of Your skin my skin, and was pulled up short. The space is transformed, painted and arranged to suit the exhibitor, and is sometimes black, or dazzling white.

This day it was a slightly warm light grey, but what astonished me were eleven large sheets each displaying six images and ranked at even spaces on facing walls; they were curling from the pins that held their tops as you can see quite plainly in my mobile phone snaps. How could the photographer tolerate that?

A notice on the list of works explained that:

“Environmental conditions” have indeed entered the gallery…closer inspection reveals a pattern to the presentation; each sheet presented 3 details of textures of the Central and Northern Victorian bush landscape interspersed, interleaved you might say, with similarly tight close-ups of bare palms, some repeated, either on the same sheet, or across the room.

To confront at close quarters these curling prints that reach into the narrow space was like being offered something from cupped hands. Sheets of rag paper, bearing the tattoo of the inkjet printer, suspended on pins, were hanging from these walls like the bark of yellow gums in Djaara country or the river red gums of Yorta Yorta lands along the Murray River. Despite the show presenting only photographs, it is a physical installation. The prints themselves are of fine quality, but the format — the gang printing, and the unmounted sheets — do not adhere to the rarified genre of ‘fine art’ photography. The artist is taking us elsewhere.

Born and raised on Wurundjeri Country, Roberts is of Dja Dja Wurrung, Yorta Yorta, English and German descent. Her imagery allows us to see through those many eyes, and to look differently through those of the indigenous inhabitants.

Like her, I walk every day in this country around Castlemaine, on the Country of the Dja Dja Wurrung and on a longer venture walked from here, across Watha Wurrung volcanic plains, Guilidjan lakes and to the densely vegetated slopes of Gadubanud lands. Even such an isolated and superficial, white, experience will tell you how each is a very different Country. What Roberts conveys is more intimate; haptic.

The bush may look the same to the glance from a car window, but to the feet and hand, every part is as individual “as the back of your hand”, and is, not just in an animist sense — whether stone, bark or leaf — a skin. In time, over many visits to Country, it is possible to come to recognise, to know as an individual, each tree, like the back of your hand. For the indigenous inhabitants each place is known and is imprinted with murrup (spirits).

To be fair to the artist, here is an copy from her website of the ensemble above.

In her correctly balanced print the warmth and burnished lustre of living human skin, and the blood-nourished flesh underneath, is conveyed and we recognise, from the folds and whorls, that two shots on this sheet show slightly different parts of same hand. This is a sense easily applied to the surrounding close-ups of bark, to read in them an entity, a life-force, not so unalike our own, though more ponderous, and more powerful and enduring.

Roberts (*1979) is based here in Central Victorian and works full-time in indigenous educational engagement at La Trobe University in our neighbouring city Bendigo. Exhibiting mixed media, installation, sculpture, and producing music, Roberts has used the typographical format in Portrait of Lake Eppalock, prompted by her move in the spring of 2013 to the outskirts of Bendigo after spending most of her existence in the urban hub of Melbourne. Delighted  by the local natural landscape, Roberts spent her spare time exploring the national parks, forests and local waterways…

In her outraged revulsion the artist searched for responses, making, in the earliest work, ‘crime scene’ pictures of dumped take-away containers 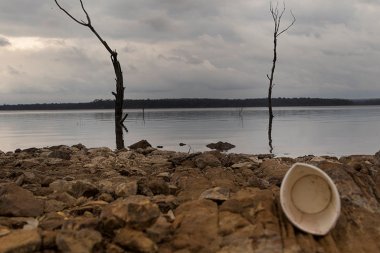 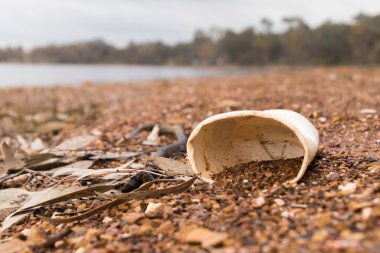 …typological assemblies of studio photographs of discarded bottles, cigarette packets, plastic bags and so on…

…and spilled a harvest of this human-generated detritus across the glass of a flatbed scanner to convey the sheer volume, the unrelenting tide, of waste.

Roberts’ early artworks are straight-talking, address the audience directly, and from them she went on to exploit, in a variety of media and  visual culture “to explore societal issues” — environmental degradation, homelessness, gender, aging and invasion — with a subversive and political charge made more gutsy by being genuine and simply expressed, fresh and without any pretension.

This show is less didactic or programmatic and warmly invites meditation.

In her own words as summarised in the wall notes:

Roberts writes that she is compelled to touch the leaves of trees as part of connecting to Country and would tell other Indigenous people about this and ask, ‘Is that what you experience?’ And she was constantly told ‘Yes.’ She wonders too, if ancestors might have touched the trees she places her hands and heart upon.

Roberts refers to two Dja Dja Wurrung words she has learnt to describe this body of work. One is Gapila (learning from country), which is a component of Nyernila which refers to ‘deep listening’ through all of the senses at the same time, listening with the whole body. She writes: ‘I am mindful that I am on my Country connected to my ancestors, I am where my people have walked since time immemorial and they will always guide my actions and influence my work.’

In an opposite corner of the Art Museum, James Henry provides us with the spoken word and sight of other Djaara and Yorta Yorta families as they experience Country, while Roberts invites us to enter that experience in the very substance.