December 10: The capacity of photography to preserve ephemera is neatly represented in imagery of that which itself is invisible, elusive, apparently benign, often dangerous; volatile gas.

British documentary and architectural photographer Richard Chivers records the shaping and re-shaping of the British landscape. As the co-founder, with Murray Ballard, Simon Carruthers and Alex Currie in 2007 of photography collective Human Endeavour he has exhibited internationally including the Brighton Photo Fringe and the Format International Photography Festival in Derby with projects Degeneration and The Glasgow Effect.

Now a member of the MAP6 Collective (like Australia’s MAP Group), he has produced projects on subjects including Milton Keynes at 50 years and the Shetland Islands. His series Off Grid of defunct gas holders, or ‘gasometers’ as they were known from the nineteenth century, will of course evoke the ‘typologies’ of Bernd and Hiller Becher who represent the tanks in use…

The Victorian technology used to distribute the coal gas for domestic use, street lighting and to factories is ingenious; as up to four nested tanks (or ‘lifts’) were filled, they rose, and their weight kept up a fairly even pressure. The telescopic gas holder was first invented as early as 1824 and was refined with the cup and dip water seal patented  in 1833, the first working example of which was built in Leeds (which is in Chivers’ series).  The lattice-like framework of girders that support the tanks and serve as vertical ‘rails’ for their wheels guiding their rise and fall is classically Victorian, reminiscent of the Crystal Palace and other structures that exploit the strength of iron and steel.

The genius of the Bechers’ huge and painstaking project (their Gas Tanks series was photographed over thirty years 1965−2009!) was to always photograph in monochrome, shooting on dull, overcast days (not hard in the factory cities of Germany, and they made Winding Towers 1966–97 in Wales), from set distances and vantage points (landscapes as well as details). Where they frame the subject tightly so that they appear as captive objects, and exhibiting them in gridded gangs, the of effect their repetition is broken by the curiousness of their difference and their variety, which slowly dawns on the viewer.

Though their subjects are  mostly obsolete industrial structures, they stressed that ‘right from the outset we have likewise photographed very newly built plants … And it is simply not true that we are only interested in ‘antiquities'” In 1970 however, Bernd and Hilla Becher began to actively campaign for the preservation of the utilitarian constructions they photographed, amid a general tendency toward more appreciation of this kind of structure that had occupied so much space, and exerted such presence, that it had been overlooked.

To regard the Bechers imagery as part of the minimalist or conceptual art movement beyond  photography is also not correct, given the longevity of their projects dating back to periods before they were aware of concerns occupying a few avant grade artists of the time; their interests stem from when they met while both worked at the Troost advertising agency in Düsseldorf and while Bernd Becher, born and raised in the town of Siegen close to the Hainer Hütte steelworks, was studying typography and Hilla Wobeser trained in graphic and printing techniques at the Kunstakademie. 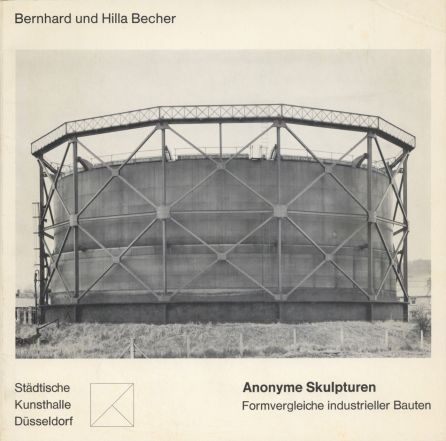 They started photographing together in 1959, but it was only in 1969, when the Bechers were given a solo exhibition (the title of which translates as Anonymous Sculptures: formal comparisons of industrial buildings) at the Städtische Kunsthalle in Düsseldorf (24 Jan—9 March 1969) at the same time as an exhibition Minimal Art (17 Jan—23 Feb 1969) from the USA that, seen in that context, they started to be regarded as Conceptual artists. While the term ‘typology’ is often used in relation to their oeuvre, given their training, their ‘formal comparisons’ might better be understood in relation to typography.

The dogged consistency of their process is highlight when rephotographed and digitally superimposed by Idris Khan (born 1978 in Birmingham) for his composite Every… Bernd and Hilla Becher Prison Type Gasholder, which seems to reactivate the almost imperceptible ‘breathing’ motion of these mechanical giants.

Richard Chivers motivation in capturing images of 35 gas holders from across England is out of historic interest, to create a visual record of the remaining examples of the structures:

Three or four years ago I read an article in the news that most were to be demolished so I decided I would try and capture some of them before they were lost forever. Quite a few of these structures are now gone or are about to go, so the images themselves become a record of our industrial heritage and for some people a nostalgic record of a place they used to inhabit.

Chivers’ choice of colour in contrast to the Bechers’ black and white lends his imagery a contemporaneity; where their pictures seem as much ‘out of time’ as their subjects, his have a sense of immediacy. In several cases a work crew has pulled up in a van or truck and is about to start work, or signs of labour are suggested.

In his picture made on the corner of Kennington Oval and Clayton Street in London, the famed cricket ground is just behind us, but this old pub in the foreground has remained hidden behind hoardings for years. On its chimney it bears a mural banner of a batsman being spectacularly bowled out, and above it, a Fosters beer logo, set askew. Construction-site signs spill out onto the road as workmen stand, or lean, in a variety of shiftless poses around a van and shipping container.  Like the gasometer that rises behind it, the pub has reached the end of a useful life. Because of the prominence of the four skeletal forms—of which this is the largest—there were any number of foregrounds at Chivers’ disposal. In his choice of this one he is conscious of its meaning.

This is also a personal artistic endeavour, since Chivers’ father worked on the gasometers that aroused his son’s consciousness of them in the urban landscape, which others ignore as being a mere part of the clutter of their crowded environment. Once they were too ubiquitous and too big to see, but now they are under threat, and Chivers has rushed to record them, using a 4×5 view camera that shares their Victorian aesthetic and their use of the telescoping form; camera bellows also permit expansion and contraction, in that case for focus. 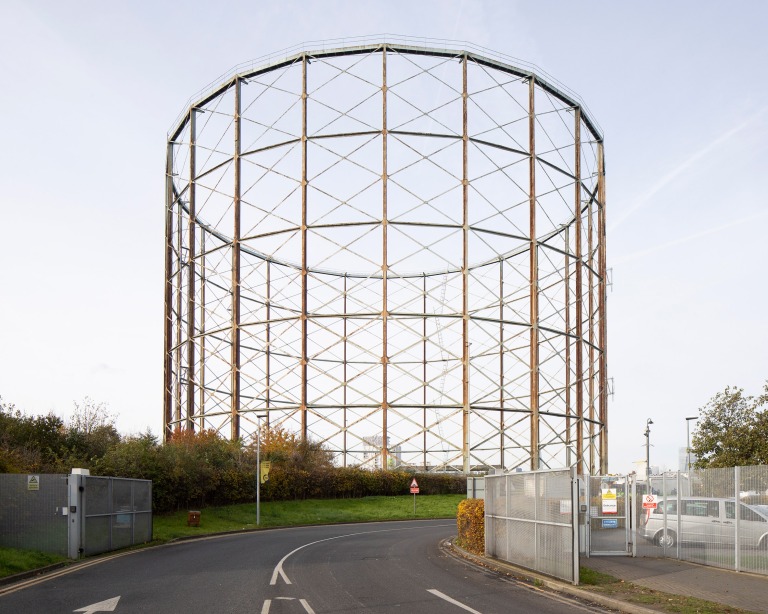 In others of the series Chivers exploits the form of these looming frameworks for their abstract geometry, with disorienting results. He carefully avoids the convergence that is inevitable when using an ordinary camera tilted back from ground level for a view of a tall structure. Through his deployment of the ‘rising front’ of the view camera, Chivers’ alignment of vertical girders at front and back of the latticework force an optical illusion in which the perfect oval of the rim seems to tilts forward uncannily. It’s a perceptual twist that sets prosaic everyday foreground detail at odds.

Where Chivers seems to abstract forms of these gasometers and presents them as a grid on his home page his intention diverges from the Bechers’. Built in Victorian times, it is the uniqueness of each intricate and ingenious assembly—the product of the drafting table translated into steel by skilled workmen but without our resort to hydraulic cranes and lifts—that attracts him; “when photographed in a certain way [they] look beautiful.” He connects with them in a personal way through his own father.

These skeleton leviathans are ephemeral, like the strokes of the draftsman’s pencil, and are fading into the past. Though they signify a polluting resource best banished from our air and environment, photographs preserve their uncanny attenuated beauty.