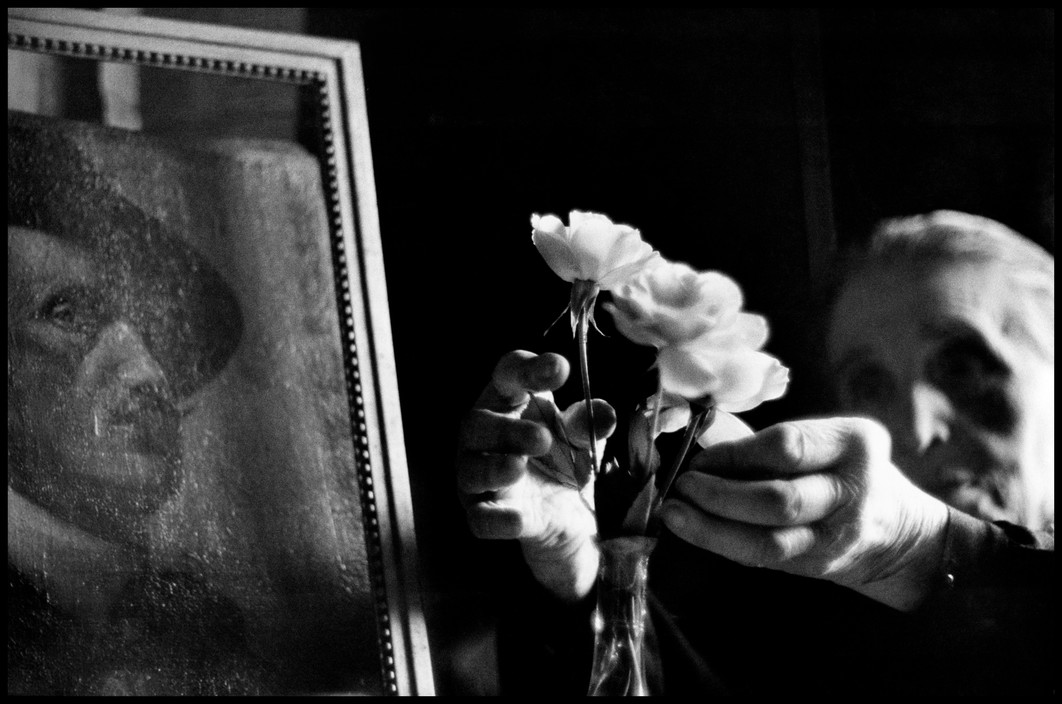 December 28: It’s my birthday and so for me a time to remember my heroes in photography, and what better thing to do than to ensure that they are appropriately memorialised.

Ed van der Elsken is one, of course, who died on this date, but another is one whose work I first saw in the days when American, and a few British and French photographers, seemed to be the only ones in the universe—such was the the monopoly those nations held over photographic publication during my early teens, a period when heroes reigned.

The pictures I saw appeared in one of the many photography magazine annuals to which my father subscribed and I also encountered them in Esquire, so they made a romantic impression which turned a young man’s fancy, and admiration.

An old woman appears in these dark images; so sombre are they that all appear to have been made in the night hours. The setting is Paris, Montmartre in fact, of which I had childhood memories, and the photographer, I was later to discover, was a 22 year old American draftee posted as an Army photographer to Supreme Headquarters Allied Powers in Europe, on the outskirts of Paris. There, in an international army camp, he befriended a French soldier who invited him home for lunch with his mother. Walking down Rue Lepic he saw an old lady and his friend introduced them. The young photographer was Bruce Davidson.

As a birthday present to myself I have committed recent hours in augmenting his Wikipedia entry to one befitting such a photographer, significant historically, and to me.

The copy in Esquire was brief and let the pictures do the talking:

Across the narrow rue Lepic from the Moulin de la Galette, up eight flights of stairs, under the thin roof of a Montmartre studio garret lived an old widow. She was the wife of Léon Fauché, an impressionist painter who was a close friend of Gauguin, Toulouse-Lautrec, and Renoir. Her husband died, leaving her with a small military pension and sixty paintings. Montmartre changed, but the widow stayed on. Each day she would go down to streets crowded with tourists seeking the past, and buy flowers to place under her husband’s self-portrait. Then at twilight, as the weakening evening rays made a shadowy symbol of a long-dead Paris through her studio window of the Moulin de la Galette, she was absorbed into darkness with her memories

It is apt that for this, among his first magazine stories, Davidson chose that most forsaken of creatures; the widow of a forgotten artist (though Léon Fauché was the organiser of the ‘Salon des Refusées’). The young photographer was to become a champion of the downtrodden, particularly in his diligent, long-term coverage of homeless, troubled teens, civil rights Freedom Riders and the tenement dwellers of East 100th Street. He photographed the latter on a large format camera, an unfamiliar instrument (the lens board appears in at least one of his wide-angle shots); and as a result faced both praise (from John Szarkowski) and criticism (from A. D. Coleman) for the resulting amalgam of document and art in his imagery.

It is propitious then, that Widow is treated with a cotton-wool soft focus, perhaps originally intended to refer to the Impressionist milieu of the subject’s past, but clearly, it is intentionally ‘arty’ and at the same time nostalgic. Madame Fauché appears in public like a wraith, unseen by the lovers or crying children in Steinlen Park who, for her, are poignant mementos.

The series brought about a friendship with Henri Cartier-Bresson, and entrée into Magnum Photos agency, and a huge boost to a magnificent career;

And that is the work I showed Cartier-Bresson when I met him. It took a couple of weeks, Magnum said “well, he is not here, bla bla, next week, bla bla…”. When I finally met him, he looked at the contact sheets, the prints as well, but primarily the contact sheets.

It is Davidson’s approach to printing, “dark like a Degas bronze” and his counterintuitive choice of a large-format camera that has most influenced my own photography…dare I include an example? Well, it’s my birthday…

In this extended interview in which he gives away insights into using such a camera, about the ‘Decisive Mood’ (his take on the ‘Decisive Moment’), and the environmental portrait, he says;

Yes, one of the reasons I chose to use what would be regarded as an old–fashioned view camera on a tripod, with a flash, was that I felt it dignified the act of photography. I was eye–to–eye, face–to–face with the subject. The only thing that connected me to a camera was the little cable release, but I was really looking into the eyes of my subject. The environment was also important; what surrounded them was part of the picture, too. It was part of their expression. If the wall had a picture on it or a birdcage or nothing, it said something about them.

An Outsider on the Inside: David S. Spivak interviews Bruce Davidson Jun 19, 2016