May 1: Imagery of the exotic is so much part of photography as to be a distinct genre.

The capacity of the medium to convey credible visual records of inaccessible, distant or forbidden places was marketable almost immediately after its invention, as soon as equipment became portable. Does photography of the Middle East merely coincide with the peak of Victorian interest, or is it the cause? What of the converse; the way that those in the East regarded the West?

The Middle East had been a site of fascination for painters throughout the Romantic period, the so-called Orientalists, and with the advent of photography interest in its culture, which was so unlike the European’s own, boomed.

Photographers set out with equipment to photograph the ruins and to seek out locations of the Near East and Middle East mentioned in the Bible; Israel and Palestine, Lebanon and Egypt. Their pictures could be printed and sold either singly or as books, albums and souvenir illustrated books.

However there was one individual who was looking for the exotic in the opposite direction. The Persian monarch Nāser ed-Din Shah, who was assassinated on this date in 1896 having reigned since 1848, toured Europe and Berlin, London and Paris in the summers of 1873, 1878 and 1889. His visits, the first by an Iranian king, attracted huge public attention and he was welcomed by royalty in these countries. His progress was followed closely by the media and illustrated with fanciful engravings and caricatures, and inspired books and novels as well as theatre and operettas, all of which drew on all kinds of Orientalist stereotypes and fantasies, of harems filled with voluptuous Eastern beauties, and of the fabled decadence and ruthlessness of feudal rulers.

To the Shah, Europe was the exotic. Coming from a homosocial society in which the sexes remained separate, he was horrified, but ultimately fascinated, seduced even, by what he saw as a weird society in which men and women mixed and were expected to dance together; in which the rulers would be accompanied by their garrulous wives, of which they had but one at a time and with whom they remained into old age, when the women, as he reported in his safarnama (travelogue), would become repulsively ugly; and where women of all ages would display their the skin of their shoulders and chest in public.

The Shah published these writings in Iran to be read in court circles and by the literate elites in Iran, as well as in other Middle Eastern and Central Asian countries. Later they were also published in an English translation, though all of these versions were heavily censored and it was not until the Iranian National Archives produced the full originals in the 1990s that their full content, and what Nasir al-Din actually thought, became known, and available to writers like Dr. David Motadel (*1981).

Most revealing are his remarks that show how different were standards of beauty. He was disgusted with the relatively powerful position of German noblewomen in court life, and their hairless faces covered with white powder were the opposite his Qajar ideal of the kaman abru (“bow-eyebrows”) or hilal abru (“crescent eyebrows”) of Persian women and their gul rukhsar (“rosefaced”) natural red cheeks and a visible soft down of moustache.

Nāser ed-Din Shah’s visits to Europe however filled him with admiration and envy of the technological advancements. The first photographic apparatuses, cameras, tripods and instructions, given to him sometime between 1839 and 1842 were gifts of diplomatic missions from Queen Victoria (1837–1901) and from the Russian Czar Nicholas I (1825–55), the two colonial powers in Iran.

The first photography was made in Iran in 1842 during the reign of Nāser ed-Din Shah’s father Mohammad Shah by a Russian diplomat named Nicolai Pavlov, or possibly Frenchman Jules Richard (1816–91) who claimed that he took the first daguerreotypes there, including portraits the young Nāser ed-Din. Given the Shah’s enthusiasm, photography was taken up by the Qajar court and spread throughout Persia. 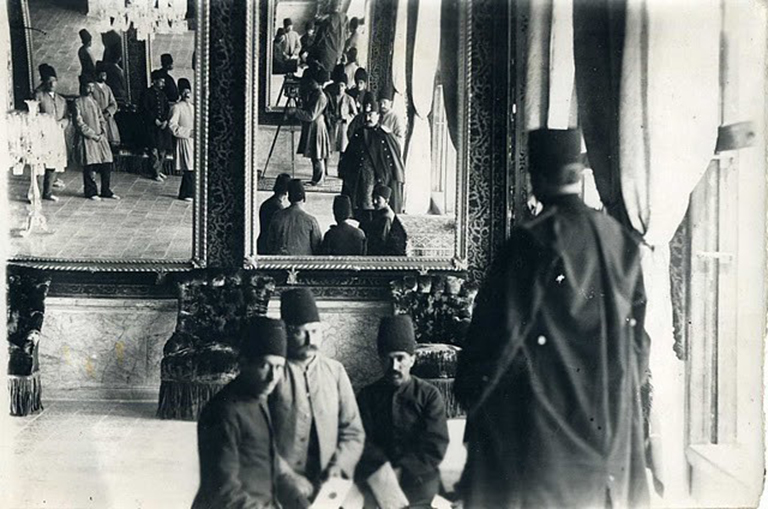 The image above, in which the Shah appears at right, directing procedings, is an intriguing experiment using the large mirrors of the palace. The result is reminiscent of the arrangment of Velázquez’ Las Meninas. Photography represented a modern, easy means to achieve perfect and modern realism, though quite different to that of European art, to which Persian art had aspired since the Timurid period, from at least the late fifteenth century, especially in portraiture and in contrast to the perception of Persian art as floral and decoratively abstract. 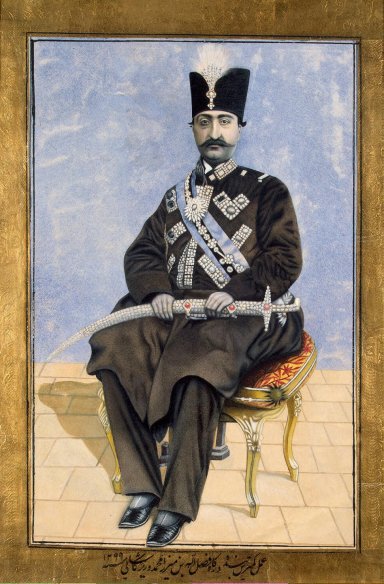 The Shah himself was a very skilled painter and the development and uses of photography in Iran were very much influenced by his tastes and that of the subsequent ruler. Above is a portrait of him in a photograph and in a painting clearly derived from a black and white photograph with delicately painted rendering of perspective in a Persian style. The style and framing of photographic portraits are also received from European photography. Nāser ed-Din Shah records his delight in having himself portrayed by the famous Nadar on his first visit to Europe in 1873.

Even before his first visit to Europe the Shah adopts fashionable European dress and the swaggering contrapposto stance of the Parisian boulevardier in this self-portrait made against the decorative surrounds of a palace portico. Behind him is a chair on which he may be about to sit for a more formal portrait, though the setting does appear to be out of doors, judging by the condition of the pavement beneath him, and was either necessary for exposure of the slow calotype emulsion, or was a choice based on his acquired taste for things European.

Nāser ed-Din Shah promoted photography and lithography as cheaper and more practical alternatives to commissioned paintings, and had photography taught with physics, mathematics and military history, first by Europeans such as Francis Carlhian (d. 1870 Tehran), appointed in 1859, who taught the Shah himself, and then by young Iranians trained in Europe.

For Nāser ed-Din Shah photography symbolised his own modernisation and Europeanisation, a mirror image of the admiration and fetishisation of the Orient being expressed in European art.

One thought on “May 1: Exotic”