December 24: In my search for my daily photography I often delve into Gallica at the Bibliotèque National de France, which is full of enchanting treasures such as the those below which present a familiar sight; children visiting Father Christmas.

In Christmas Eve picture by the Agence de presse Mondial Photo-Presse, Pére Noel and the children are flanked by what look like nutcracker soldiers come to life, led by a gruff medal-bearing general, sword at his side and fag in his mouth.

Lucien Boyer (1876–1942), songwriter, composes the hymn of the new Republic to the  music of Borel-Clerc in 1923 and its refrain “Mont’là-d’ssus, mont’làsusus, and you’ll see Montmartre …” is heard across the country. 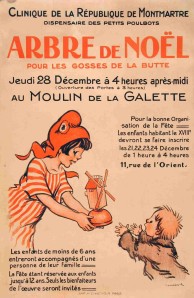 The Republic of Montmartre is populous and poor and without social services. Francisque Poulbot (1879–1946), the “Father of the Kids”, encourages philanthropists to contribute to meet the considerable need by organising promotions at the Moulin Rouge, the Moulin de la Galette, Galeries Lafayette or the Médrano circus. These featured Montmartre personalities such as Jules Chéret, Jean Gabin or the Fratellini and were advertised with posters Poulbot himself designed (above); he was an illustrator and his amusing drawn vignettes appearing in newspapers and magazines of the period, particularly Le Sourire were very popular. The shows collected funds for gifts and meals during Christmas for the ‘Little Poulbots’, the ‘street children’ that he so often drew, and the sick children of the Bretonneau hospital.

That these were popular events is evidenced in the image below, taken at the event in 1922. The dial on top of the contraption on the stage reads ‘Natural’, ‘Charcoal’, ‘Aquarelle’ and ‘Pastel’ and the sign on its rear ‘…GRAPHIE’ might be the last letters of PHOTOGRAPHIE. Is it a prototype for Instagram filters?

It was also the site of a competition for child musicians and singers, seen here lining up in at 3:55 pm with their accordions, favoured at the time for the popular musette waltz music, for an audition. The photograph was taken in a later year as there are decorations of vines around the awnings not seen in the other images.

Getty Images captions a photograph shot at the same time as the one below;

On September 10, 1932, on place du Tertre in Montmartre, in front of ‘Conservatoire des gosses’ (Academy for kids), a child [standing high on a gaily decorated dais] strikes up a folk tune of the Butte Montmartre in a celbration to inaugurate the Academy.

Behind the boy Montmartre’s rural policeman appears once again.

Perhaps our ‘rural policeman’ is a fixture of some kind? He either remains stolidly in place from September 10 until Christmas Eve, his clothing and beard unchanged, or the Getty date is incorrect and this performance is in fact taking place at Christmas time.

It appears that the lad is being recorded by a microphone and sound equipment in front of the boy. In the shot below another young singer entertains the crowd. There are smiles all round amongst the audience several of whom delightedly eye the press photographer. The previous singer, in his white shirt and this time wearing a floppy beret, looks on at the rear right. One of the ‘toy soldiers’ with his distinctive row of brass buttons and epaulettes who is seen guarding the children in the foreground of the Père Nöel shot above, is now bareheaded bemusedly follows the boys gesture; it seems a joke is being made about the fellow in the hat and tie. 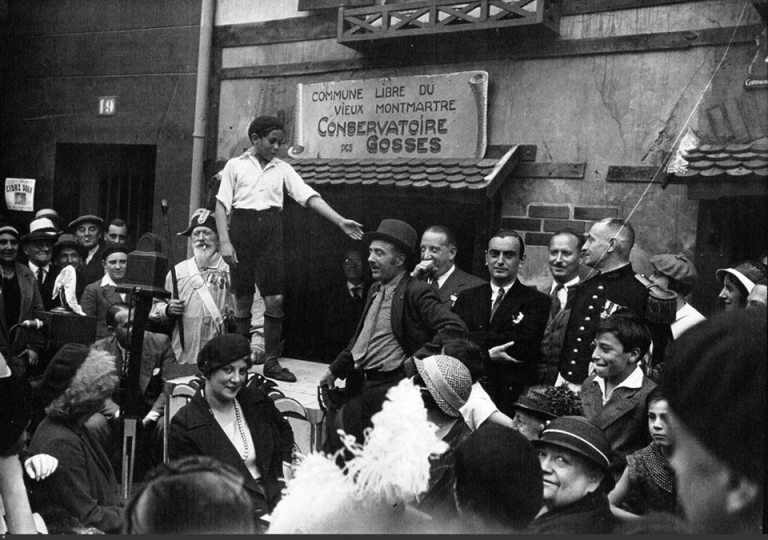 Despite the closure of the dispensary in 1936, the social action of the Republic persisted. Frustrating a would-be developer, Poulbot and his architect friend Romain Delahalle create a playground for the children of La Butte, the “Square de la Liberté”, and later came the  idea to plant vines there in the Montmartre wine-producing tradition, initiated by the Romans and developed by the Abbesses de Montmartre. If you’ve been there, you may have been enchanted when stumbling upon the vineyard at the corner of the streets of Saules and Saint Vincent, between the Lapin Agile and the old house of Aristide Bruant. The first harvest of “Clos Montmartre” took place in 1934. A new dispensary, supported by  the Republic of Montmartre through various festivals and events, was set up at the Place du Tertre.