November 1: This date in 1941 was when, after a frustrating day photographing a cottonwood stump along the Chama River, Ansel Adams (1902–1984) “saw this wonderful scene out of the window. The reaction was so strong I practically drove off the road.”

The result is an image well known to you; Moonrise Over Hernandez.

Adams himself gives at least two accounts of the making of the image; one appeared in U.S. Camera Annual 1943, in which Adams gave a clear account of the meter readings he made and his camera settings, saying it was ‘a twilight shot’.

Forty years later, in the 1983 Examples: the Making of 40 Photographs. Boston: Little, Brown and Company. pp. 41–43 his story is that he had no meter and no time to expose the second sheet in the 8 x 10″ double dark slide.

Likewise, he was confused about the date; it is variously listed as having been made in before the 1937 fire which destroyed many of his negatives, in 1940, or in 1941, or 1942, or 1944 and though we now know the true date and year, Ansel never did, any more certainly than he was to settle on how to print the image. 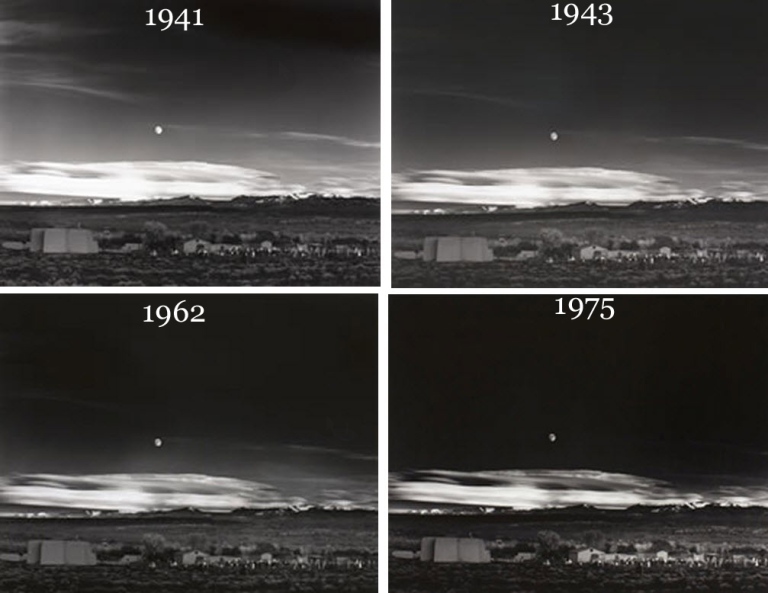 Above are four renditions of the negative from amongst the 1,300 photographic prints of it that Adams made during his long career. It was a 1948 version, of which The Ansel Adams Gallery estimates there are only ten copies, that earned the highest price for a single print of $US609,600 at Sotheby’s in 2006, and sales of other versions have fetched prices totalling in the millions.

Mary Street Alinder, Adams’ assistant and 1996 biographer, writes that Moonrise is “for many…the greatest photograph ever made.” For her, it is an early example of his application of the Zone System in which the photographer determines at the time of shooting how the negative and print will result in a realisation of a ‘previsualisation’ ‘in his mind’s eye’.

If we accept his 1983 account of the taking of the photograph in which Adams says he had lost his exposure meter, it means that what he did without a meter would actually constitute a very ‘seat-of-the-pants’ approximation of the complex augury of the Weston Meter dial entailed in the application of the Zone System. To be fair, he says he used his knowledge of the luminance of the moon as a guide to place that on Zone VII, three stops below Zone X which he normally reserved for pure white or ‘light sources’, but he does not say where he placed other tones in the image, and it would have been difficult to do so in the subtly changing ‘twilight’ in which he says he shot.

the image comes before the photograph (which is merely its reproduction), and the film is already inscribed with a picture before it is ever exposed to light.

He excuses Adams vacillation over how to render, in his prints, the ‘previsualisation’ of Moonrise on his shooting in “difficult circumstances” and on the resultant “recalcitrant negative”.

How recalcitrant it was can certainly be seen to be in this straight contact print (left, below) of the large format negative, which shows it to be thin (the film rebates as printed here still carry tone instead of being much closer to paper black) with the moon still carrying detail, and with more clouds 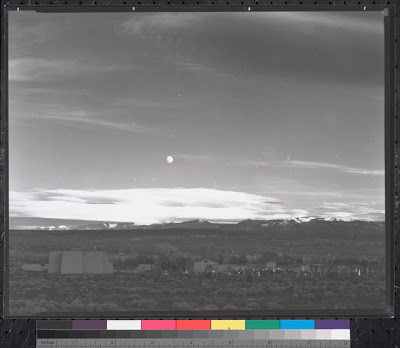 appearing in the upper portions which are obliterated in most printings.

The difference between the 1943 print above and the 1962 version is that Adams had tried in 1948 to resolve the inconsistency of printing he was experiencing by treating the lower half of the negative with Kodak IN-5 proportional intensifier (its active ingredients being silver nitrate and sodium sulfite) to lift detail  the shadows of the foreground of the negative. Even then, according to John Sexton, his assistant in the 1980s, it was a challenge to print. When Ansel was burning in the sky, he had to open up the aperture of the enlarger by 4 stops and give it up to 70 additional seconds, all while holding the exposure on the moon constant.

But how do we arrive at the date of November 1 for the taking of this famous image?

Collector and photo historian Beaumont Newhall was driven to distraction by his friend Ansel Adams’ inconsistencies and inaccuracies in dating his pictures, so contacted astronomer David Elmore of the High Altitude Observatory in Boulder, Colorado, in 1981 (three years before Adams’ death) to settle the matter.

Driving to New Mexico, Elmore determined the position of Adams’ tripod, then returned to his computer and entered the moon’s altitude and azimuth which he had determined from the photograph…to produce a date of October 31, 1941, at 4.30pm.

However another astronomer Dennis di Cicco‘s 1984/5 attempts to duplicate these results found that Elmore had mispositioned Adams’ camera on the new highway. With this corrected, his 1991 calculations returned dates in 1939 and 1941.

It was only after comparing the moon in the original negative that he was able to see that Adam’s heavy burning-in of the moon in his prints had shifted the apparent position of the terminator (shadow creating the moon phase); the moon was much fuller, and so therefore the year had to be 1941, and the new coordinates gave November 1, at 4:49:20 (Mountain Standard Time). However daylight saving was in place throughout the year in wartime 1941, so the shot was taken twenty-five minutes before the sun sets in Hernandez on that date. With the sun still in the sky and sufficient to light up the crosses beside the adobe church, the photograph was not taken in by ‘twilight’ but at sunset. 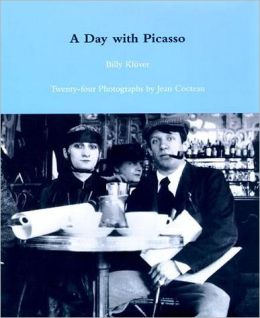 That photographs record visual data that can be used with such accuracy sits at odds with their reputation for untrustworthiness asserted in so many ways by Susan Sontag.

I have outlined the use of such data in photogrammetry, but more colourful still is the work of remarkable engineer Wilhem J. Kluver (1927–2004) who founded an early organisation for collaborations of art and science Experiments in Art and Technology (E.A.T.) in 1966.

His ingenious readings of shadows and other arcane, ephemeral data embedded in Jean Cocteau’s snapshots of his fun day out with friends in Montparnasse, determines the date and a chronology, and uncovers much about their relationships, during their increasingly boozy meanderings. His research methods and findings are entertainingly detailed in his “A Day with Picasso,” Art in America, September 1986, 97-106, 161-63,  a article which later became a book.

Rather than ‘demystify’ and make art mundane, science applied to art may actually increase our appreciation of it!