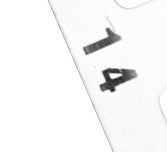 October 14, and I’m turning my thoughts to two different approaches to formalism.

Today is the birth date of contemporaries German/American Ruth Bernhard (*1905, who died in 2004) and Belgian Antoon Dries (*1910, who died in 2005), both long-lived so that they were alive during the rise of Modernism, the twentieth century series of styles and ‘isms’ that were devoted largely to dissecting and reassembling the elements of form and expression.

Ruth Bernhard needs little introduction; just this one image will jog your memory:

Known for her studio photography marked by dramatic lighting, pared-down compositions and a propensity to work at a single composition until it was ready to be photographed – she was decisive and patient. It is more common to see a female nude like the subject above from a man, but where a man photographs a female nude, she is often objectified. Somehow, this image is tender, despite the monumentalism of the forms.

Woman has been the subject of much that is sordid and cheap, especially in photography. To raise, to elevate, to endorse with timeless reverence the image of woman has been my mission. (Bernhard in Margaretta K. Mitchell (2000) Ruth Bernhard Between Art and Life )

A comparison with two other images will illuminate how this ‘elevation’ is achieved. The first, Two Leaves, shot the same year as the nude above, undeniably shares its forms, the same central axis and graphic alignments. The edge lighting comes likewise from two sides here but here both have equal weight and are used to emphasise texture. Both nude and leaves sit in a pool of light within the solid black boundary of the frame.

There is another impulse at work; an inclination toward classicism, means that Bernhard’s title Classical Nude, echoes this work by Praxiteles, a Crouching Aphrodite or so-called Venus of Doidalsas  from the mid 3rd century BC (Paris, Louvre) 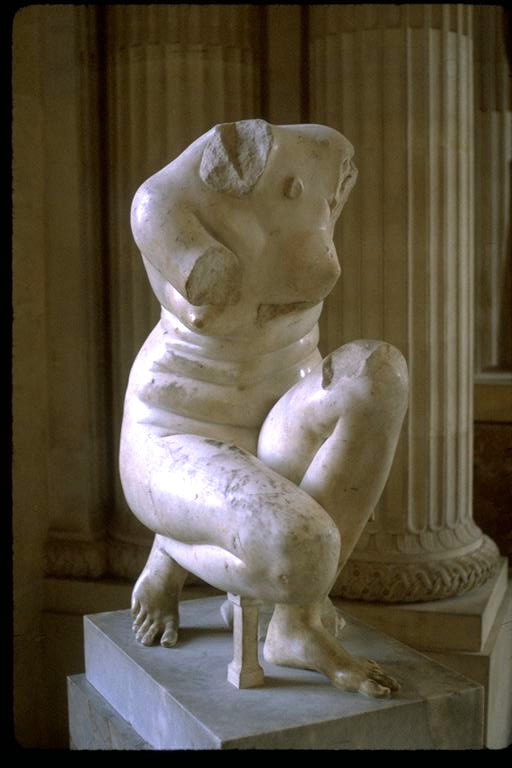 The sculpture’s pose relies on limbs and torso being wound like a spring. Bernhard’s by comparison, while tight, and which also projects an alertness, is easier, and, being a photograph, not a sculpture, represents a moment in a partnership of photographer and model rare to be found in images of women by men.

But I want to point to one more influence:

A commercial product shot (for fabric, not fashion, I should point out), this looks as if the two leaves above have transmogrified a female form which tapers to foil-like points, seeming to deny the laws of anatomy. In part, this is achieved by ‘hard’ lighting from photoflood reflectors (see the slightly blurred shadows) placed to cross each other from the upper rear and from the floor at the front.

We double-take when encountering this image; what slows our realisation that beneath the stretching fabric is a woman, is Bernhard’s use of the background paper. Normally used to isolate the subject with an ‘infinity’ backdrop, here the model actually stands beside and behind the draped expanse of paper, so that it cuts across her legs, scissoring the form, in a manner we might find in a Miro or a Calder. It is a puzzle to work out where the model has hidden her head, so successful is this deception, and yet the formidable athleticism of her form becomes more striking, more sculpted, as we look. We realise this is not a denial of anatomy, but as an exaggeration of it.

It is abstraction wrought from the real that makes Bernhard’s work so worthwhile in contemplating. Lighting is used along with design to intensify our experience of everyday form as a revelation. Some say this is surrealism, but to me it is a purist’s extension of classicism into the modern, not dissimilar in spirit to Picasso’s neoclassicism of the 1920s, but driven by a quite opposite sexual impetus. Bernhard was bisexual.

The other photographer, Antoon Dries, is elusive, recognised in his native Belgium and to some extent France, but little mentioned elsewhere. Modern Belgian art photography of the fifties allied itself to the concept of subjektive fotografie  (as opposed to Neue Sachlichkeit – ‘New Objectivity’ – of the German 1920/30s). The most representative Belgian photographers of this period, amongst whom Dries is one, were Robert Besard (1920–2000), Pierre Cordier (b.1933), Julien Coulommier (b.1922), Gilbert De Keyser (1925–2001), Marcel Permantier (1918–2005) and Serge Vandercam (1924–2005).

Their emphasis was on nature studies, abstraction, studies of materials and portraits. Subjects such as documentary reportage, architecture, industry and still-life are either absent or infrequent. Transmitting the subjective experience required the use of unusual viewpoints and fragmentation, close-ups, selective focus, camera blur, and camera less photographic techniques such as photograms, cliché-verre and luminograms that were made in the darkroom. They applied both high black-and-white contrast and more extreme techniques such as solarisation, negative prints, bas-relief, and photomontage or double exposure. These are ‘formalisms’ that arise from the medium rather than the subject.

Not ten years after Bernhad’s Classic Torso, Dries here worked close-up, using selective focus to distance his subjects from reality, questioning the structure of objects so that they represent other things. Coincidentally, in Kentucky, Ralph Eugene Meatyard was doing similar things in his ‘No-Focus’ series, but for different purposes.

While it may be possible to distinguish out-of-focus tree trunks, a spider’s web and dried twigs in this image, photographic effect extinguishes all but the essentials of these details through underexposure, and overprinting (note the grey tones of the ‘sky’) to the extent that foreground and background fuse, then interchange, forcing the viewer to look through the image rather than at it, to enter into the picture-making process, and then flick back to its effect.

Chance alignments of three-dimensional forms (twigs, trees, web) generate ciphers writ both broad and fine, that are inscribed over the what would otherwise be a transcription of what was before the camera.

…with a concrete block resting amidst some overgrown lawn. Again, nothing is pure white. The tones are subdued in order to slow our recognition of the subject, but don’t deny its reality. The ‘provocation’ is the picture-making itself, the precise alignment of a chance encounter of a block of cement with the edges of the photographic frame, the intrusions of blades of grass are rendered dark-on-light, by red filtration, underexposure and printing, as calligraphy, while from the less dense stippling of the pitted block of cement flickering, subtle white-on-grey linear forms materialise.

The photographic image may be abstract.