February 8: ‘Light painting’ or ‘painting with light’ is an exciting means of creating images in photography. It involves the photographer moving into the real world in front of the camera to mediate in their images with light.

Jan Pohribný, a Czech photographer born in Prague on this date in 1961, is now a veteran practitioner of ‘luminography’, i.e. drawing with light, a term some have come to use as a catch-all term for any open-shutter illumination. Strictly luminography may be distinguished from ‘light painting’ in that the light is aimed toward the camera to create streaks and lines, rather than being used to illuminate the subject.

In Inner Light, which is representative of his work, Pohribný uses both techniques; ‘drawing’ produces the miraculous rays of light, and ‘painting’ in blue to lend the sand sculpture a stony quality, yellow light to illuminate the surrounding sand, and the mysterious opening at centre, in contrast.

On his website one can see the transition in his work as he discovers and then masters and then excels in the technique. Both an artistic and commercial photographer and occasional curator of exhibitions, he has been photographing since he was a child of eight.

He began in the early 1980s to make images in the landscape, relating the subject to space by tracing movement. In his Pigments series (1983-1985) he made these traces using  dyes and powdered paints, for instance spreading it on the sand before the waves so that a painterly streak appears both on land and in the sea. The series Flight followed, in which he used fast and slow shutter speeds, sometimes in combination with flash (a ‘flash and blur’ technique) to capture objects mid-air (1985-1986).

From 1988 he conceived of depicting the iconic sites of prehistoric Europe which results in an extensive series New Stone Age employing light to interpret the cultural/spiritual dimensions of landscape in and around the megalithic standing stones, dolmens, portal tombs, quoits and tumuli, imagining and reviving the gestures and signs of extinct rituals and visualising the ‘energies’ on which they call.

Too often light painting, tracing with light, or drawing with light, can be a gimmick in search of an idea. It proliferates on media like Flickr and Instagram, mainly because it is an excellent training in lighting and exposure for photography students, since it gives exciting results, so much more quickly delivered with digital imaging which is now at a state of the art that permits long exposures without excessive noise.

Pohribný’s work attests to the fact that the technique is not as new as some younger practitioners imagine, having been employed in 1889 by Étienne-Jules Marey and Georges Demeny to trace human motion.

In 1914 by Frank and Lillian Gilbreth using small light globes attached to parts of of manufacturing and clerical workers’ bodies and limbs in their pioneering ‘time and motion’ studies.

Both Man Ray (1935) and Barbara Morgan (1940) have legitimate claims to being the first art photographers to create light drawings.

In terms of ‘light painting’ Ansel Adams in the 1930s recommended it as a means of evenly lighting large interiors for commercial architectural work, and during the last decades of the last century patent devices like the fibre-optic, shutter-equipped Hosemaster began to be used for ‘painting’ product shots. In this century a proliferation of light sources are available, even to LED arrays and iPad apps which can be programmed to produce light pulses as they are moved through shots, or even to produce apparently ‘floating’ texts.

The mystical qualities and effects of light painting and drawing, especially in conjunction with colour, lend themselves to Pohribný’s ‘archaeological’ purpose, with undeniably beautiful and, one might say, virtuoso results, and sometimes subtle, as above. This especially considering the fact that he was using film without the instant feedback of the digital camera screen. At best Pohribný, in the 1980s and even in the early 2000s, had available to him only Polaroid proofs which are only a very rough guide and require changing camera backs or the use of two cameras, conversion of ISO to that of the film being used, and adjustment for separate compensation ratios for reciprocity failure and white balance.

It is a measure of his devotion to an idea rather than an effect that Pohribný does not restrict himself to just these techniques as he concentrates on the meaning he wishes to convey; the sense that these massive stone monuments have been erected by the human hands of the ancients and with organisation, persistence, intelligence and symbolic thinking relatively more intense than the reckoning of our own distracted minds. 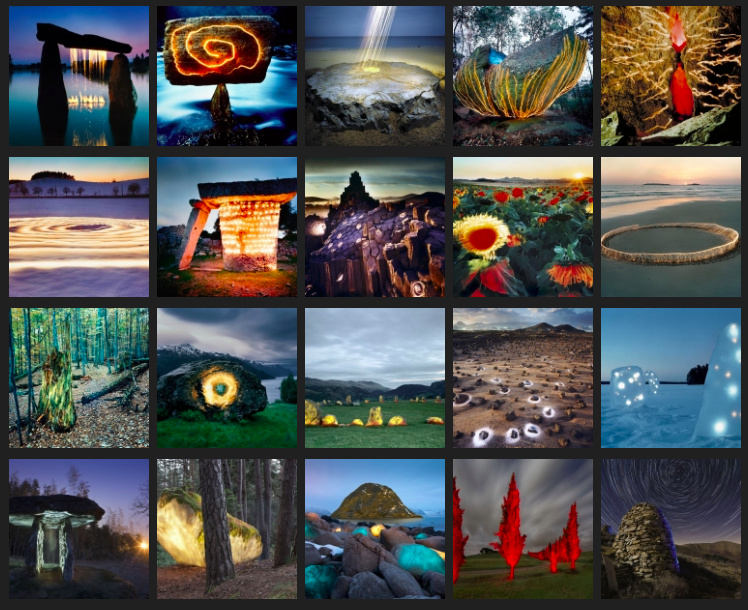 One thought on “February 8: Lumen”