January 25: Photography provides a means of satisfying our curiosity about the appearance of the great, especially if they lived before we were born.

Henry Walter Barnett, born on this date in St Kilda in Melbourne, Australia in 1862, had the ambition to seek an audience with the great and mighty to create such images.

He did so in a softly lit Pictorialist style and with an Edwardian formality, and yet there is a liveliness and intimacy here even so. Look into the face of Robert Louis Stevenson, whose adventures and poems you no doubt have read, and see if you agree;

There is every bit the larrikin in this face. Here is the famous writer who upon arriving at the Victoria Hotel in Sydney, Australia, launched into a purple rage over the horrible room he’d been offered, berating the poor desk clerk, who was ignorant about his celebrity and suspicious of his unhealthy thinness. His wild-looking wife scandalised Sydney high society with her unkempt dresses. The two had arrived from their island retreat in Apia, Samoa, where the writer sought relief from his chronic respiratory illness.

Stevenson loved teasing local intellectuals who, when they asked what he was reading, would find that his favourite reading matter was detective novels. His temper was evident in his red-hot open letter defending the then deceased Father Damian, whom the poet had met tending the sick in a Molokai leper colony, from denigration by a Reverend Dr Hyde (named coincidentally and so aptly, as if he’d stepped out of Stevenson’s  The Strange Case of Dr. Jekyll and Mr. Hyde).

Apparently Stevenson was also photographed by renowned Sydney portraitist Charles Kerry, but I cannot track down any examples. No other formal photographs of the writer so transparently convey the writer’s character as do these two by Barnett, the rest all showing him thoughtfully clutching a pen and staring poetically into the middle distance.

H. Walter Barnett had left school at thirteen started to work as a studio assistant to Robert Stewart in Melbourne in 1875, before in 1883, aged twenty-one he had opened own studio in Hobart, Tasmania 1883 which he sold a year later to his partner for funds that got him, via the USA, to London, where he joined royalty and theatre portraitist W & D Downey at 57 & 61 Ebury Street, Pimlico, Westminster. A restless ambition bought him back to Sydney where he opened the Falk Studios in Sydney, operating there from 1885 to 1900.

While in Australia he photographed other  visiting celebrities including Mark Twain… 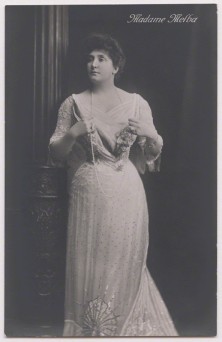 …and Dame Nellie Melba as well as Australian Impressionist painter Tom Roberts with whom he’d assisted in his first job at Robert Stewart’s studio in Melbourne. Here, in what appears to be an improvised shot with his mates, Roberts (left) joins the photographer (centre) in the company of the celebrated fraud and self-acclaimed explorer, the picturesquely bearded Louis de Rougemont (born Henri Louis Grin).

Barnett’s portrait lens, which is already soft-focus at the edges, is given a slight forward tilt to pull focus on all three heads. Perched on wooden fruit crates the three pose rather uncomfortably, while the photographer who is standing has propped himself against some piece of furniture wrapped in canvas and is resting his hand on what appears to be a flash-powder holder. Clearly it is intended for an oval mount, but a great deal of retouching is yet to be carried out.

In November 1896 Barnett & Maurice Sestier, an employee of Lumiere Brothers, filmed scenes of the Melbourne Cup. One of the Melbourne Cup films was first shown on 19 November 1896 at the Princess’ Theatre in Melbourne, Victoria, as part of a theatrical matinee in aid of a fund for the Royal Victorian Institute for the Blind courtesy of Lady Brassey, the wife of the Governor of Victoria.

The clip showed the arrival of Lord and Lady Brassey and the vice-regal party at the Flemington racecourse on the day of the Melbourne Cup. The audience, as they do now, loved seeing celebrities, which a vice-regal party then was, especially when the orchestra in the theatre played the National Anthem just as it was beng played by the band at the racecourse in the film, in a very early experiment in synchronised sound. To have captured the entire vice-regal party strolling over to their private enclosure demonstrates the cinematographers’ impeccable timing; it is shot in one continuous scene with no edits, pauses or jumps.

Sestier and Barnett returned to Sydney where on Tuesday, 24 November 1896, at the Criterion Theatre, they showed several of the films taken in Melbourne. Advertisements for these shows announced “15 Tableaux of the MELBOURNE CUP from the arrival of the GOVERNOR to the finish of the last race” would be presented.

These, along with scenes of Sydney Harbour which Sestier had developed in Barnett’s studio dark-room in September and October, are among the first moving films shot in Australia. 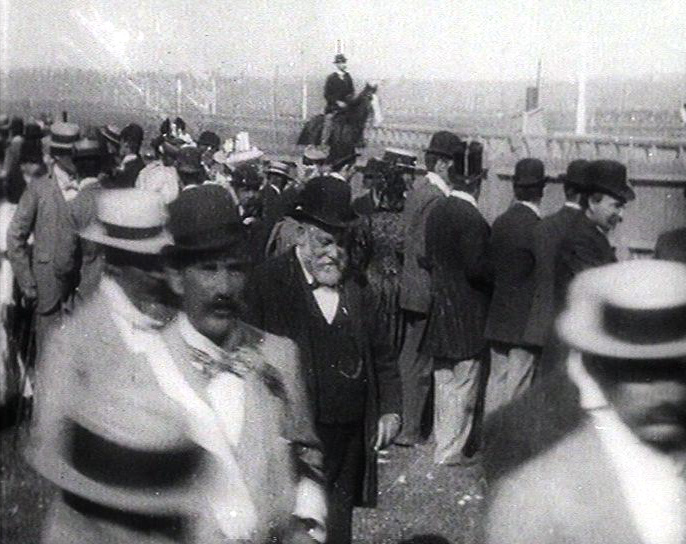 Having become a very successful and wealthy prospect, Barnett married Hilda Frances Clement Forbes (b 1869) July 18 1889, before  moving back to London with her on 1 February 1897, having already established another studio at 1 Park Side, Knightsbridge, Westminster. He soon established himself as a leading photographer, with sitters who included the royal family and many prominent in English society. The portraits were printed on specially prepared platinotype paper and placed on flexible vellum mounts. An English obituarist remarked that they resembled fine mezzotint engravings.